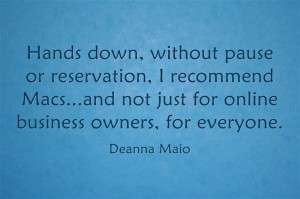 I got a question recently that caused me to stop, drop and roll.

Hey Deanna,
So…just as I get all fired up on our call, my computer dies not 3 hours later :/  And after a local tech guy ran 36 hours of diagnostics, the hard drive is dead with no warning or explanation. Fortunately, I backup and will lose minimal data. Here’s where I want your opinion. I need a new machine and I’ve heard for years that people in our business love the Mac. Just wondering if you have an opinion, as you integrate a lot of useful technology in your business. It’s a bigger investment, but I’m willing to consider it. Especially since I want to market using more video and possibly podcasting. I love my iphone so this might be a good move.
Any thoughts? -KH

Warning, I have a very strong opinion about this issue.

I supported Windows machines as a helpdesk technician and helpdesk supervisor for 5+ years. I have been on a Mac for a little over 2.5 now. (I also had a Mac for a short time in 1995-1996 But, you can’t really count that.) Until 2.5 years ago I would have said i would have been a PC until my death, however…

Hands down without pause or reservation, I recommend Macs…and not just for our industry, for everyone.
1 primary reason. The amount of errors or problems is SIGNIFICANTLY reduced on Mac.
The other reasons I love Mac.
Are there drawbacks? Yes.
Now after having said that, if you don’t plan to edit video, I wouldn’t spend the money if you are
1) not really ready to buy a new computer
2) don’t care about being cool.
You can get a decent Windows laptop from Dell these days for $500. A new MacBook or MacBook air will run $1300+
If however you are going to edit video, I’d say get a Mac.
And as far as podcasting goes, you can do that with any computer. And all the other major programs I use run in a Web browser so it doesn’t matter what computer I’m using. Yes, there are apps I like on the Macand there may not be a Windows equivalent but, I could live without them.  I could not, however live withoutiMovie.
I hope this is helpful.
I warned you I had a very strong opinion on this.
Oh and I used the MacBook as an example because I love having a laptop and wouldn’t live without one. I travel too much locally (1/2 week in Portland, 1/2 week in Battle Ground at my boyfriends) and I travel enough for work 4-6 trips a year…not to mention vacations. If I had an office or worked from home all the time, I’d probably still have a laptop because I like to have the flexibility to work from anywhere. However all the above opinions still hold true for the Mac desktops.
If you do get a laptop, I would highly recommend you get a case to put on the outside on Day 1. It will help it stay nice. Even though they have a metal body, can be scratched and dinged. Here’s the one I have:  http://www.amazon.com/gp/product/B00AGM4FB2/ref=oh_details_o04_s00_i00?ie=UTF8&psc=1
Hope this is helpful. Please let me know if you have questions or would like to know more. And sorry for the length…You can see my passion for this topic, right?
Thanks,
Deanna

So what do you think? Do you as an online business owner prefer Mac or PC? Put your comment or question into the comments below and let’s get this party started.