What Are The 5 Generations Of Employees? 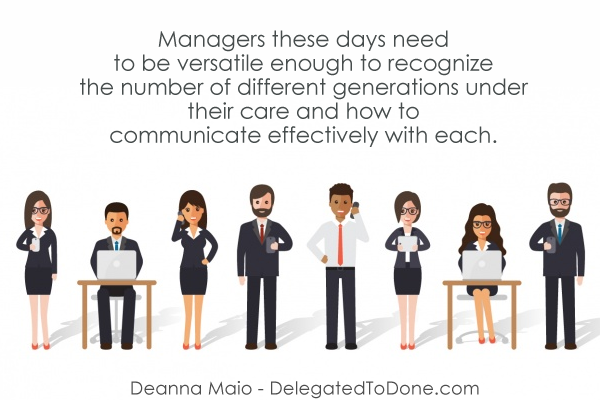 In today’s workplace, there is a lot of diversity. One aspect of the diversified work force that is not often considered is generational. Age plays a significant role in how people perceive their job in the workplace, how they communicate and also how they respond to changes that occur. Keep reading and learn about the five generations of workplace employees.

Just who am I working with?

Besides the typical differences that team members have: race, creed, religion and socioeconomic status, there is also a difference in age. There were four main generations that existed, but now we are up to five. This means differences in experiences and upbringing that color how and what we view as problems and conflict. Handling conflict is also a different animal, depending on the generation of the team member who is being addressed.

Managers these days need to be versatile enough to recognize the number of different generations under their care and how to communicate effectively with each. Add to that the fact that individuals within the same generation have differences, and you have a gigantic task ahead of you. But, don’t be dismayed. The first step is becoming familiar with each generation, which is what we are about to highlight right now.

The 5 Generations of Employees in the Workplace today

[Tweet “Who is working for you in your office? It could be one, two or all of the five generations listed above. https://www.delegatedtodone.com/what-are-the-5-generations-of-employees”]